See what is used the list form, describes the process of its creation in the designer and explained what will be generated in the code depending on the values of properties set in the designer

The list form provides a user interface for displaying a list of data objects in a view.

To describe the list forms must be created in the CASE of a UML class with the stereotype “listform”. For example:

The class UI-independent forms list that are inherited from ICSSoft.STORMNET.UI.BaseIndpdList.

The most important thing in additional properties - choose which lists (what classes and when), should be placed on a list form. This is done on the “Composite view”.

On the form (whether universal or generated) will be placed as many list controls (ObjectListView) as the composite views.

The composite view generated in the following way:

ViewForForm - the view that the list will obraztsa data in order to select a class and view, click on the “ … “ button: 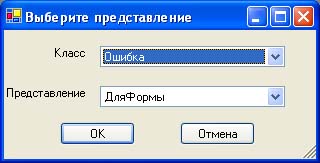 DataObjectTypes classes of data objects which must be “pumped” to the list. This may be the class whose representation is specified in ViewForForm and any of its successors.

In order to edit the part types, click on the “…”: 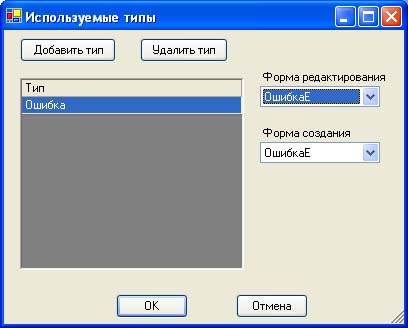 Also, for each type indicated which form should be used when editing and creating objects of this type.

Description of used of types is generated by the GetEditor method overloading in independent form.

ListFormOperations - list available for the given list of operations.| Allows you to specify which operations are available on this list (accordingly, what buttons appear on the control panel):
in order to edit the available operations, click on the “ … “ button: 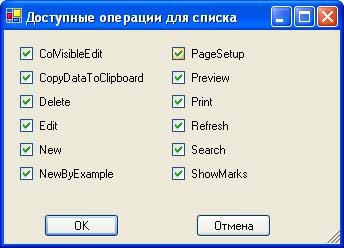 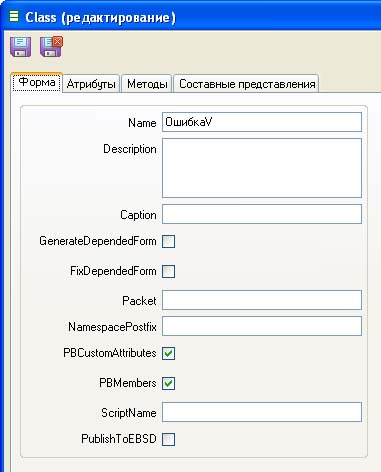 |Property | Description / Generation .Net language |–|– | Name - name UML class| Name .Net class independent of the form and its derivative for the dependent (e.g., winformXXXXXX). | Description - some description of class.| DocComment before the class definition an independent | Caption - a user name (shown in UI)| Title on the form | GenerateDependedForm| If the option is set, - generated UI-dependent (WinForm) form the user interface in the source code that allows you to “manually” change the location of the automatically placed controls or add new ones. If the option is not installed, use the generic UI-independent form, which is automatically placed controls - lists ObjectListView. | FixDependedForm| If the option is set, - UI-dependent (WinForm) form not pregenerated. This is done to make sure that are made in the form of changes in the composition and arrangement of the controls will not be lost, which sometimes occurs due to the presence of (unfortunately) error in the environment Visual Studio .Net.
If the box is not ticked, UI-dependent (WinForm) pregenerated, except for the part where, given the composition and location of the controls. | Packet, NamespacePostfix - allow to set the Assembly and namespace | see the Location of assemblies after code generation. | PBCustomAttributes - allows you to specify whether to brace the programmer immediately before the class definition, for “manual” of any attributes | If the option is specified - generated bracket of the programmer for manual application .Net attributes to class-independent form. | PBMembers| If the option is specified - generated bracket programmer for “manual” introduction of the members of the class of independent form. | ScriptName - the script name to use this form. Matches the name of the EBSD-maps used to describe the scenario.| PstrfGetScript method in class independent is overloaded so that it returns from the provider scenarios scenario with the specified name. | PublishToEBSD| If the option is specified before the class-independent form is generated to specify a PublishToEBSDAttribute` attribute that specifies the availability of this class to use the chart editor scripts.

The properties of the attributes are the same as referred to in article Attributes data classes, given above (in paragraph 4 “What is generated”) comments.

Properties methods similar to those described in the article class Methods and method parameters, given above (in item 5”What is generated”) comments.