Any application system that is created on the basis of Flexberry Platform, contains three logical levels: 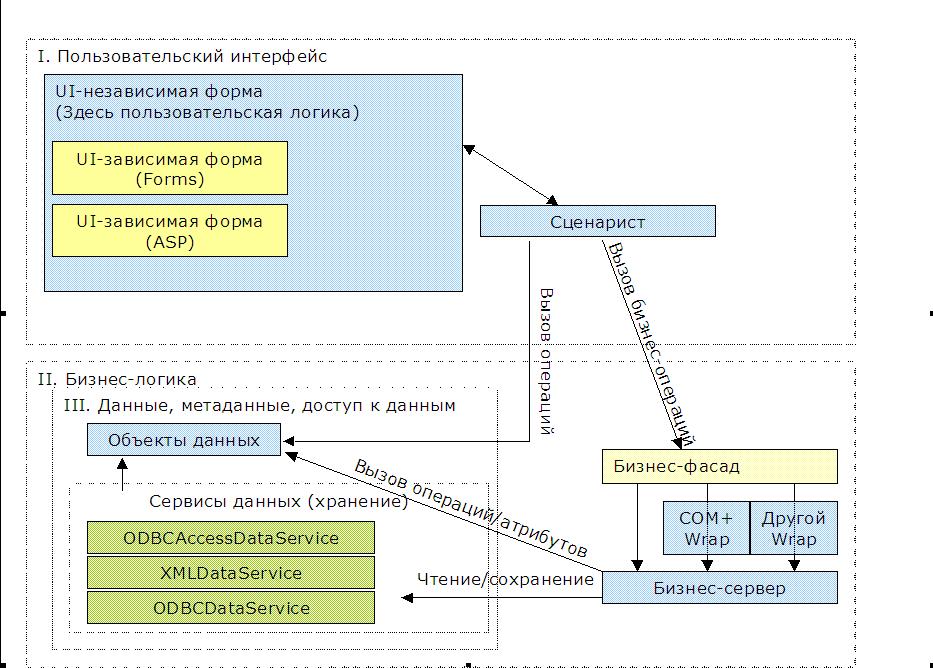 Level III is represented by the data objects assigned to them with declarative metadata and data services that provide the basic functionality for working with repositories.

Level II submitted by the business server that contains the code of system-wide operations on the data objects and operations performed when the data services (handlers). A business server can be executed both independently and through some wrapper (e.g., wrapper COM allows you to perform a business service under COM ).

Multi-tier distributed client-server architecture with a separated application server and its implementation.

The logical architecture of the system can be physically implemented as:

Data services can serve as local sources (files) and the DBMS, so the physical architecture can be implemented like this:

It can be exotic «and», the type of the local file, but Web service.

Obviously, the use of different media gives different possibilities. Everything here is at the discretion of the developer.

The physical location code (both the source and binary builds) does not matter. The connection of the parts of any system and a foreign system as a subsystem are implemented by connecting respective assemblies.

The division of the Assembly within the system is the responsibility of the developer.

Separately existing metadata does not exist, instead, defining additional class properties (view, for example), attributes (e.g. NotNull), methods, etc. identify the attributes of .Net. In essence, all the additional metadata are defined declaratively .Net-attributes directly to the data classes, their properties etc.

There is no universal of information class (ICSSoft.STORMNET.DataObject.Information) with static methods to retrieve metadata. Access application developer to declaratively defined metadata (.Net-attributes) is not to be pursued directly (through .NET Reflection), but only through appropriate methods of this class information. The only exceptions are those attributes which are entered directly by the application developer.

Data storage and independence from storage

Servicom dannyh refers to any implementation of the abstract class ICSSoft.STORMNET.Business.DataService, providing the save/load any data objects in any repository. The details in the article Service data.

Forms are designed for interaction with the user.

Formay is the method of providing a user interface to access one or more data objects. Forms are _UI-zavisimye (depend on the physical nature of the interface – WinForms, WebForms) and _UI-nezavisimye. Custom logic must be implemented in a UI-independent forms that will allow you to make fewer changes, and to avoid code duplication when implemented in a system other types of user interface.

_UI-dependent forma can be uniwersalnymi, i.e. to implement some standard functionality without the possibility of any modification. As a rule, it is necessary for very simple objects for which it makes sense to save on the creation of individual forms. Universalnye UI-dependent forma can be generated (from the source code) and then zaprogramirovan.

Forma spiska allows the user to “polymorphic” to work with a list of data objects as its own class and any inherited classes. In this case, the form of the list identifies the data classes of the descendants and the name of the compatible view.

Forma pechati allows to obtain a printed copy of the data object in accordance with the representation(s).

Business service is also used in cases when the service data repository (adding, deleting, etc. of the object), you want to perform any action.

When code is generated for each business server is created:

There is the following problem when creating multi-level systems: there are separate data access, business logic, user interface. However, as (than) it is possible to combine these parts in a working system? In other words, how (where) should be recorded that under certain manipulation of the user interface forms displayed in sequence and when there is a call to the business server?

Of course, it is possible, as is commonly done,» «hard to register calls directly in code, for example, in the user interface, however, it is a bad idea for the following reasons:

At the same time, this is the uniting logic is nothing but a scenario for the user and can be described as an independent entity.

To solve this problem, in Flexberry Platform provides for the establishment of event-oriented scenarios (EBS — Event-Based Script) and their interpretation.

There is a special component Scenarist (EBSI — Event-Based Script Interpreter) providing the execution (interpretation) of the script in RunTime.