Once defined the functional requirements for the system and its boundaries, should be subject проанализировать область to build the class diagram.

Диаграмма классов типы defines the classes of the system and various kinds of static связи that exist between them. The diagrams classes are represented as attributes of classes, operations of classes and the restrictions imposed on the relationships between classes. The view and interpretation of the class diagram essentially depends on the viewpoint (abstraction layer): classes to represent domain entities (in the analysis) or elements of software systems (in the processes of design and implementation).

The main elements of class diagrams

The main elements are классы and связи between them. Classes are characterized by using атрибутов and операций.

Атрибуты describe the properties of objects of the class. Most of the objects in the class get their individuality from differences in their attributes and relationships with other objects. However, objects with identical attribute values and relationships. I.e. the individuality of objects is determined by the fact of their existence, and not to differences in their properties. The attribute name must be unique within a class. An attribute name may be followed by its type and default value.

Операция is a function or transformation. The operation can have parameters and return values.

Ассоциация (association) – represents relationships between instances of classes. Each конец ассоциации has кратностью (synonym – power orig. — multiplicity), which shows сколько объектов located with the corresponding end of the Association, может to participate in this отношении. In the example in figure each Товар has skol ugodno Записей in накладной, but each Запись in накладной necessarily Odin Товар. In the General case, multiplicity can be specified in any set. The Association can be named. As имени usually chosen глагол словосочетание or verbal, in communicating the meaning and purpose of communication. Also, at the ends of the Association under the multiplicity can be specified имя роли, i.e. what is the role of the objects from this end of the Association.

Агрегация (aggregation) is the Association of type «whole-part». Aggregation in UML appears to be a straight line with a diamond at the end. Ромб connected specifies which class is агрегирующим (i.e. consisting of» qmo), a class from the opposite end — aggregate (i.e., the «part»).

Наследование (inheritance) is the ratio of type «total-private». Allows you to define such a relationship between classes when один class has the behavior and structure of a number of other классов. When you create a derived class from a base (one or more) there is a hierarchy of inheritance. Implementation inheritance is a key prerequisite for reusability of code, since it is the main tool to achieve polymorphism. 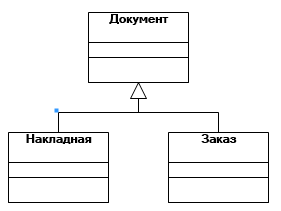 How to build class diagrams 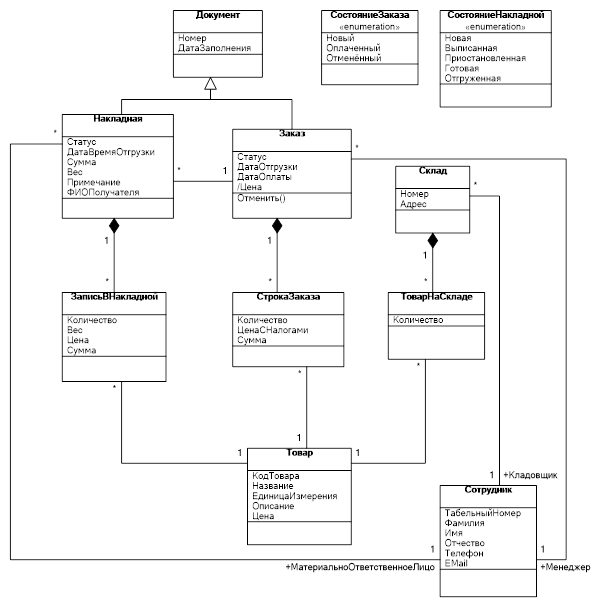 The main entity in the system will be the product. As we know from the design specification, the goods stored in the warehouse. But the concept of the product as a description of the goods, lying directly in the warehouse, are different from each other. Commodity, underlying stock, except that associated with the warehouse with respect to composition (aggregation is not really suitable, since in this system the product is a commodity until it leaves the warehouse), another is characterized by the amount. Similarly, you should talk and when considering the relationship of the Goods and Order Invoice. Due to the fact that Заказ and Накладная in fact are documents and have similar attributes, they were United through a common ancestor class Документ. It is noteworthy that the diagram shows two classes with the stereotype Enumeration (transfer). A stereotype can be set from the context menu for the class. 3.To save the graph.

For building UML diagrams, use Flexberry Designer - a convenient online tool. After a simple registration process is enough to create a project, go to list of charts and create the desired chart.